The Plague Lords of Ruel: walkthrough

The gamebook can be completed in many different ways. This walkthrough is compiled according to the following criteria, in order of importance:

You can take up to five items. If you don't already have equipment from other books, choose the following:

If you have already completed the previous gamebooks, all you probably need is the Potion of Laumspur (and possibly the Quiver for more Arrows).

In the game rules section of this gamebook (as in all the following gamebooks of the Grand Master series), it is said:

If you have successfully completed any of the previous adventures in the series (Books 1–12), you can carry your current scores of Combat Skill and Endurance points over to Book 13.

This passage can be interpreted in two ways: either the text is simply informing you of the option to keep your character from previous adventures instead of generating a new one, or it is giving you the option ("can") to determine new Combat Skill and Endurance scores even if you choose to keep a character from a previous adventure. The new rolls are significantly higher than in the previous adventures (e.g. the maximum "base" combat skill in the Kai & Magnakai series is 19, while in the Grand Master series it is 34), even accounting for bonuses due to Lore Circles. This makes it advantageous to reroll one's stats, especially for players who have had some of their scores permanently reduced (e.g prolonged use of Helshezag, Adgana, etc.).

Another alternative for players who completed all of the first twelve adventures above is to add another 15 to their base Combat Skill and 10 to their base Endurance scores before starting this adventure. This equalizes the combat skill and endurance of the Kai & Magnakai series with the Grand Master series. If taking this alternative, one should not add bonuses from Lore Circles.

The justification of rerolling the statistics is evident when reaching book 17. With statistics carried over from books 1-12 and including the advancement bonus, the player still remains at a combat disadvantage when facing the final two enemies of that book: Demonlord Tagazin and the Deathlord himself.

(260) You can choose one of two routes to reach Mogaruith: the Forest of Ruel or the Skardos Mountains.

The latter contains only one unavoidable combat (and you can evade the monster after 6 rounds), but it's a tough one.

If you have selected the disciplines suggested above, you strictly follow the instructions of this walkthrough, and have the Sommerswerd you will probably find the Forest path easier. In any case, do not choose the Forest route if you don't have Kai-surge: death is almost assured. 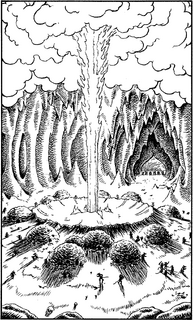 (284) If you have Grand Huntmastery, you will know there's fresh water in the air coming from the east tunnel. Unless you possess Baylon's Fungi, do not choose the west tunnel: go east.

(28) When you hear steps, take cover in the north tunnel. Do not ambush the patrol.

(198) You are given the option to use Telegnosis to scout in spirit form. Whether you do it or not, it changes nothing: you will have to fight a Dholdaarg. It's a very tough monster (use Kai-surge to better your odds), but you can evade after 6 rounds of combat. You should evade the Dholdaarg after 6 rounds of combat even if you are able to defeat it, otherwise the Druid and his minions will come back for you.

(306) Take the north tunnel, even though it smells of Vazhag.

(85) Once you arrive at the Vazhag colony, Grand Huntmastery will allow you to detect a concealed lever. Ignore it.

(127) In order to distract the Vazhag, unless you have Assimilance, use Psi-surge. If you do have Assimilance, you should choose any of the other two options instead. If you are detected and have Animal Mastery, evade the Vazhag and then ambush them. If you don't have it, any option you choose gets you the same results.

The Forest of Ruel[] 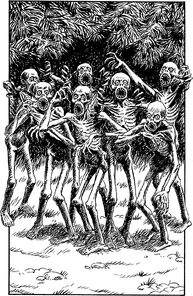 (206) When you get to three dark pits, do not use Divination, you will only hurt yourself.

(32) Retreat from the zombie horde or they will attack you with their powerful psychic abilities. In any case, you will have to fight the three Ruel Giganite. It's a relatively easy fight if you have Kai-surge; it's much more difficult without it. You can evade combat if you manage to reduce their EP low enough, but unless you have Grand Nexus you will lose 6 EP.

(286) A Cener Druid will attack you, first psychically (-4 EP if you don't have Kai-screen) and then with magic. To counter the magical attack, use either the Sommerswerd or Kai-alchemy. Then you will have to deal with the Vazhag, but you can avoid the fight if you have Assimilance and use your Bow.

(160) If you have a Cener Mask and Cener Robes, ask the Vazhag what they are doing and let them escort you inside Mogaruith. Otherwise, hide aboard a wagon.

(98) Once inside go in the Library and follow the two young Druids. 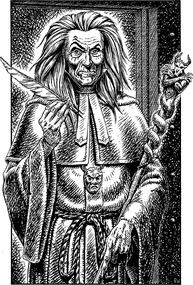 (205) Investigate behind the door and take the Copper Key. Use it to open the door at the end of the tunnel.

(78) Assimilance increases your odds of avoiding a nasty fight with a Degradon.

(150) Tell the scribe you are an agent from the Lastlands. When he asks you to dictate your report, attack him.

(240) Once inside Cadak's room, take a closer look at the golden statuette. You will find a Golden Key. Take it.

(125) After a magical attack, Cadak will conjure an Exterminus to fight you. If you have Grand Pathsmanship (or both Magi-magic and Kai-alchemy), evade after 4 rounds and you will defeat it. Otherwise, you can still evade but there's a very high chance you will die if you do.

After you defeat the Exterminus, Cadak escapes to fight another day, and you restore 8 endurance points.

(50) You have finally found where the virus is being brewed. There are no real choices to be made here; simply take the tests and hope for the best. If given the opportunity to use your disciplines (Kai-Alchemy, Magi-Magic and Grand Nexus are checked for at various points), do so. There is a small chance of instant death, avoidable with some good luck as well as Kai-Alchemy or Grand Nexus. If you have those disciplines, raise your endurance above 25 or at least above 15 if you can. 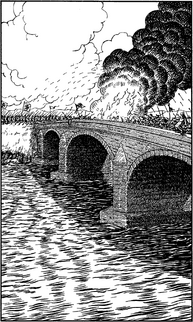 (220) After you destroy the laboratory where the virus was being produced, you will have to escape. There's a first unavoidable save-or-die test: having Grand Huntmastery gives you better odds; if you also have EP > 28, the instant death outcome is eliminated.

(128) Take the east passage and use the Golden Key to open the secret door. You will find a chamber full of useful Potions (except for the Gallowbrush).

(234) If you want an extra Alether Potion, go back to the west passage and kill the Druid (if you have the Sommerswerd, do this anyway since you gain an extra 3 EP). Otherwise, leave the room by the passageway.

(214) Once you are in the room with the spawning vats, attempt to hide from the patrol. Assimilance or Animal Mastery give you an automatic success. Then, ascend the left staircase.

(255) Once outside, don't rush to the drawbridge. You will risk death and will surely lose all your Backpack Items. Search for another way instead. In any case, you will have to fight a Vazhag lancer.

(182) At the bridge, you will have to make an unavoidable save-or-die test. Unless you have both Assimilance and Grand Huntmastery, you only have 60% chance to make it. (If you have them both, it's 90%).

If you survive the bridge, congratulations! Your mission is completed!

Lone Wolf's average Combat Skill (assuming you picked a 5 when determining your initial CS) is:

Lone Wolf is at disadvantage if the Combat Ratio is -4 or less, i.e. if the enemy Combat Skill is 4 or more units higher than Lone Wolf's one.

Community content is available under CC-BY-SA unless otherwise noted.
Advertisement